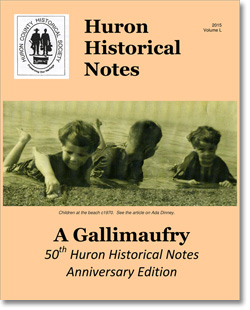 Message from the President 2015

Two milestones are being noted in Huron County this year, 2015. The first one is ours - the happy celebration of the 50th anniversary of the Society's publication of Huron Historical Notes. The second anniversary is of a more sombre nature and it involves the stripping of a generation of youth from our county to meet the demands of WWI. Young people signed up before and after the big send off in 1916 but the biggest contingent was the 161st Huron Battalion. They were shipped out via train to training camps before embarking for Europe. The members of the Battalion were separated and directed to support other battalions in the war effort.

David Yates spoke of the call to arms and who responded in his November address to the Society. It was an eye opener to many and leaves us ready to see how this event is noted in our communities this coming year.

Our 50 anniversary will be duly celebrated at our spring AGM. The speaker will be a surprise but not the cake!

As a County Historical Society we try to locate our six general meetings around the county. With that in mind we started in Auburn last year with Carman Johnson of Burlington presenting her book Our Land of Milk and Honey, a Dutch family immigration to Huron County 1948-1957. It was a warm inviting group made up of a lot of relatives who still live in the area. In Holmesville we heard Anne Doty talk about her family's contribution to the manufacturing picture of Goderich. There are still some Doty engines powering ships and generators today. Liz and Pam Sangster gave a short history of Hensall complete with an overview of the renovation of the historic town hall. Dr. John Carter presented an interesting paper on the contributions of Ryerson and Hodgins to school architecture in Ontario or "dispelling the Myth of the Little Red School house. We learned about the challenges and joys of producing a township history book. Nancy Michie, Karen Webster and Jenny Versteeg were instrumental in seeing the Morris Turnberry Township History books completed.

As of our printing on these Notes, we may be travelling this year. We hosted the Guelph Historical Society last May and they are planning on hosting us in return. It promises to be a full day of historical sites starting along the Huron Road to Stratford and onto Guelph. We will be advertising among members first through the newsletter before opening the bus trip to others. It is reminiscent of the annual bus trips the Historical Society used to organize each year around the county. We will also be looking at the great road building machines, which put Goderich and Huron County on the map. We are visiting a private club whose members devote hours and much energy into the reconstruction of these early workhorses of modern road building.

Also on the list of open meeting topics is a re- enactment of Behind the Bars at the Huron County Historical Gaol in September. We will meet the formidable Mrs. Dickson who was the gaol matron from 1872 to 1895 and her husband William who was the gaoler.

We are continuing to work on the plaque program. The first plaque to recognize a remarkable woman will be placed in a wee parkette in Hensall this coming year. Dr. Jennie Smillie was born on a farm outside Hensall in 1878, later to become Canada's first female surgeon. She taught in Huron County and saved enough money out of her $300 salary to enroll in Toronto's Ontario Medical College for Women. She graduated in 1909 and since she couldn't find any Canadian hospitals that would accept a female doctor, she did an internship in Philadelphia, later to return to Toronto. Jennie was part of a group of women who furthered the important cause of women's healthcare. The parkette with the plaque featured will keep Jenny front and centre in her community. This is all a big part of keeping our history alive. The second plaque we hope to see completed is for the Great West Shore Railway. It has been a lengthy project and involves not only the plaque itself but also the re-laying of a bit of track on the site at Sheppardton. I would be remiss in not mentioning here that there is a dedicated group working on the East Ashfield book, which is looking for both information and volunteers. Contact me to sign up.

Like so many other groups we are always on the lookout for new members and new ideas. I look forward to seeing all of you in 2015. Bring a friend or neighbour and introduce them to a bit of local history.

Council members approved at our May AGM include Rhea Hamilton Seeger, president, David Armstrong, past-president, Ralph Laviolette, secretary-treasurer and Notes Editor, Elaine Snell, membership chair, and Brock Vodden Councillor at large. Our thanks to all.

If any of you have queries about the Society or archives, please use the current information on the contact HCHS page.

Message from the Editor

In this edition, we have attempted to provide an eclectic collection of offerings by contributors, some involving a military bent, some a remembrance of people and places of historic note. It is labelled 'A Gallimaufry', an Old English term for a hodge-podge or a collection of poems, essays, and short stories that have no apparent unifying theme. For the Society, it is representative of the diversity of the interests of our members, contributors and supporters.

The president's address provides a taste of what the Society is planning this year. Hopefully, this edition of Notes will provide an enticement to join our general meetings and to offer your perspective on what makes Huron County special and of historical significance.

In commemoration of the Society's protracted beginning (1963-5), we include a copy of the Society's Constitution and Bylaws and a listing of presidents who have served over the years. Offerings of articles or memories to publish are always welcome.

We look forward to seeing you this season.