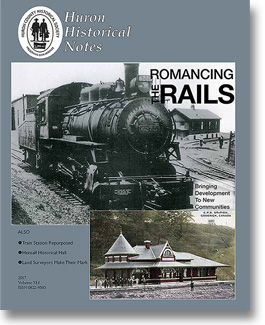 Message from the President 2017

There are a number of milestones being marked this year; the biggest being Canada's 150th Birthday. Blyth is celebrating its 140th birthday, East Wawanosh its 150th, and of course the International Plowing Match or IPM is being held in Huron County this September and what a perfect place to celebrate its 100th anniversary in the heart of the richest farming area in the province.

Everyone is having a parade and East Wawanosh is doing an updated history book of the township.

We encourage members to bring along a friend to our meetings, but you don't have to know someone to be a part of the Society. Do come to our gatherings, we would love to see you.

If any of you have queries about the Society or archives, please use the current information on the contact HCHS page.

Message from the Editor

This issue features the fascinating story of bringing a railroad line into Huron with Goderich as the end terminal. Robert Lee has gathered a remarkable treasure trove of information to add to our knowledge of the railways that were built. Part of his article is based on research he did for his book "The Canada Company and the Huron Tract – 1826-1853 – Personalities, Profits and Politics". Toronto: Natural Heritage, 2004.

We took the theme one step forward with an article on moving the CPR station and its rebirth as a restaurant at the water's edge. Not to be outdone we have included some photos of other stations in the county which have been given a new lease on life after the rails have been removed.

We also have a quick look at the surveyors who laid out the townships. Vicky Culbert, is a member of the Association of Ontario Land Surveyors Book Task Force, and also a Historical Society member. She is in love with the methodical clean lines of mapping and the intense work the surveyors did to keep the opening of the Huron Tract organized. And they too are celebrating a landmark! This is the 125th anniversary year of the Association of Ontario Land Surveyors.

We continue with our observations of our architectural heritage. Clinton has suffered another severe loss on their main street and Benmiller has saved and refurbished a lovely little school house now a community centre.

Past copies of Historical Notes from 1965 to 2016 are now available to members on the web. Non-members can access only the index to each issue.

Cost of mailing Newsletters has increased and like many organizations we seek ways to keep our costs down. Please use the form on the back to send us your email address to get future newsletters and meeting notices, or email it with your name to hchs1965@gmail.com.